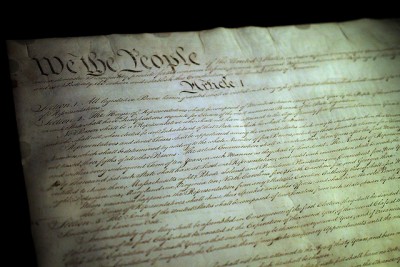 As a result of this lawsuit, the signature distribution requirement is based on legislative districts, which have a roughly equal number of voters, and the identity of signature gatherers, whether paid or volunteer, does not have to be disclosed.

In 2011, Montana had a statute, MCA §76-2-205(6) that allowed either 1) 40% of the property owners, or 2) property owners representing at least 50% of agricultural or forest land, to veto a zoning resolution. At the request of homeowners who feared that a large land owner would build a gravel pit by their homes near Lolo, Montana, the Missoula County Commissioners established a zoning district that prevented gravel mining. Landowners who represented over 50% of the zoning district (who indicated they planned to build a gravel pit) then vetoed the zoning resolution. On behalf of the homeowners, Tim argued that the veto power of the large landowners was unconstitutional because it delegated legislative power out of the hands of the elected commissioners and into the hands of a select group of landowners. The veto statute gave the large landowners the final say on establishment of a zoning resolution. The Montana Supreme Court held that under the Constitution, the elected body must have the final determination, not unelected landowners, and determined that the veto provision was unconstitutional.

John Todd was out socializing in Kalispell on his 22nd birthday in 2007. Walking home, he paused to sit and rest. Kalispell police officers stopped to check him out and approached John from the side and rear and did not announce themselves as police officers. When one officer spoke, John jumped up and began to run. One of the officers tasered John, and John fell, struck his head, and suffered a brain injury. The court ruled that the officers had “qualified immunity” under federal law because tasers had not been categorized as inappropriate force in 2007 when this incident happened. The Ninth Circuit ruled after 2007 that tasers are an “intermediate use of force” and officers must have a sound basis for using a taser on a citizen. On appeal, the case settled.

Jeff Ferguson, an Irag vet, was having a PTSD episode in his home in Kalispell. An acquaintance who was concerned called Ferguson’s mental health provider, who alerted the police. The police came to Ferguson’s home and tasered him. Kalispell made an offer of judgment in the case and the case settled for the amount of the offer of judgment.

On behalf of all Montana customers of Verizon and AT&T, Tim filed class action suits against telecommunications providers who had participated in turning over their clients’ electronic communications to the National Security Agency without a warrant. All similar cases throughout the country were consolidated in Multidistrict Litigation (MDL) in San Francisco. While the MDL cases were being litigated, Congress passed an amendment to the Foreign Intelligence Surveillance Act (FISA) that provided retroactive immunity to the telecommunications providers. The MDL court and the Ninth Circuit held that the retroactive immunity was constitutional and that citizens had no recourse to stop the warrantless collection of their communications.

Tony Reed was parked next to a road trying to observe a bison hazing operation in Gallatin County, Montana. A Gallatin County deputy cited Reed for obstruction. Reed challenged the constitutionality of his arrest, arguing that there was no probable cause to arrest him for attempting to record a government operation. The Montana federal district court ruled for Gallatin County on all counts, and the Ninth Circuit reversed the district court on all counts. After remand, the case settled favorably for Tony Reed.

A Ronan resident named Nina Tenas texted a police officer named James Garcia that Brandon Alcayde was holding her against her will in his car. When Officer Garcia arrived, Ms. Tenas was walking along a road. While another officer took Ms. Tenas to a relative’s house, Officer Garcia handcuffed Brandon, then assaulted and tasered Brandon and hauled him to jail, where Brandon was held for four days awaiting arraignment. Officer Garcia charged Brandon with obstructing a peace officer, resisting arrest, and unlawful restraint, and well a felony assault on a peace officer. The Lake County attorney dismissed all charges. Brandon sued Officer Garcia and Ronan, alleging false arrest and excessive force. The case settled for $75,000.

When US Representative Ryan Zinke resigned to accept an appointment as Secretary of the Interior on March 1, 2017, that same day Montana Governor Steve Bullock set a special election to elect a new representative for May 25, 2017, which was 85 days away. Independent and minor-party candidates can appear on a ballot only if they submit a nominating petition containing a sufficient number of signatures (5% of the votes cast in the preceding election — here 14,268 sigantures)  no later than 82 days before the election. Thomas Breck was the Green Party’s candidate for the special election, and Steve Kelly and Doug Campbell were independent candidates for the special election. They challenged the constitutionality of having only three days to collect sufficient nomination signatures.The federal district court ruled that the statutory signature requirement was onerous and violated the Constitution. Instead, the court ruled that minor-party and independent candidates were only required to collect 400 signatures over five days to gain access to the ballot.

Roger Wells died of a seizure disorder while in the custody of the Cascade County jail because his seizure medication was withheld from him. Working together with attorney Colin Gerstner of Billings, Bechtold Law Firm settled the claim prior to filing suit for $1,000,000.